Technical card
Imaging telescopes or lenses: Vixen VSD100 f/3.8 Astrograph
Imaging cameras: Starlight Express SXVR-H18
Mounts: Sky-Watcher NEQ6 Pro
Guiding telescopes or lenses: Vixen VSD
Guiding cameras: sx loadstar
Software: PixInsight 1.8, Photoshop CS5
Filters: Baader Ha 3.5nm
Accessories: Starlight Xpress USB filter wheel, Starlight Xpress Lodestar Guider
The Elephant’s Trunk nebula is a concentration of interstellar gas and dust within the much larger ionized gas region IC 1396 located in the constellation Cepheus about 2,400 light years away from Earth.[1] The piece of the nebula shown here is the dark, dense globule IC 1396A; it is commonly called the Elephant’s Trunk nebula because of its appearance at visible light wavelengths, where there is a dark patch with a bright, sinuous rim. The bright rim is the surface of the dense cloud that is being illuminated and ionized by a very bright, massive star (HD 206267) that is just to the west of IC 1396A. (In the Figure above, the massive star is just to the left of the edge of the image.) The entire IC 1396 region is ionized by the massive star, except for dense globules that can protect themselves from the star’s harsh ultraviolet rays.

The Elephant’s Trunk nebula is now thought to be a site of star formation, containing several very young (less than 100,000 yr) stars that were discovered in infrared images in 2003. Two older (but still young, a couple of million years, by the standards of stars, which live for billions of years) stars are present in a small, circular cavity in the head of the globule. Winds from these young stars may have emptied the cavity.

The combined action of the light from the massive star ionizing and compressing the rim of the cloud, and the wind from the young stars shifting gas from the center outward lead to very high compression in the Elephant’s Trunk nebula. This pressure has triggered the current generation of protostars.

Monoceros is a relatively faint constellation, containing only a few fourth magnitude stars, but it is nevertheless home to several notable stars and The Rosette Nebula

The cluster of stars are visible with binoculars and quite  well seen in small telescopes while the nebula itself is more difficult to spot visually and requires a telescope with a low magnification. A dark site is a must to see it. Photographically  the Rosette Nebula is easier to record and it is the only way to record the red colour which is not seen visually. Monocerotis is a white supergiant star belonging to the stellar class A0Ib. It has a visual magnitude of 4.47 and is approximately 1,509 light years distant from Earth. It is about 10,800 times more luminous than the Sun, has a radius 37 times solar, and a mass about 9 times that of the Sun. Like Epsilon Monocerotis, the star serves as a gateway to the The Rosette Nebula

The endless cloudy nights have provided me with an excuse to revisit some data acquired with my TSA. Hope you enjoy it!

Would you believe that was actually a 4 panel mosaic. My TSA had   a small field of view!

Cygnus  located in our home galaxy, the  Milky Way.

Here you can see my Gamma Cyg nebula project in its larger context. The surrounding area is home to an abundance of deep-sky objects, with many open clusters, nebulae of various types and supernova remnants. Some open clusters can be difficult to make out from a rich background of stars. In the centre you can see a two panel mosaic which includes the Butterfly Nebula.

An Earth-like planet … system that is 1,400 light years from our own, is located in the Constellation Cygnus 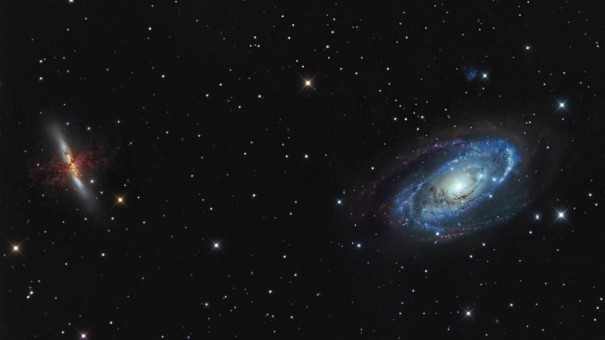 The image was recorded  in may 2015 and is a three panel mosaic. It was shot in LRGBHa.

This group of images were selected by Astrobin for “image of the day”.

This two panel mosaic of the the Crescent Nebula was published in the October addition of BBC Sky at Night magazine.